El Salvador’s President Nayib Bukele has said that he will make Bitcoin legal tender in the country. If this happens it would make El Salvador the first country to formally adopt Bitcoin alongside its national currency, the US Dollar.

“In the short term, this will generate jobs and help provide financial inclusion to thousands outside the formal economy,” - Mr Bukele told a Bitcoin conference in Florida

Around 70% of El Salvador doesn’t have a bank account. With over 2 million Salvadorans living outside of the country they currently send back around $4 billion dollars each year.

This is a very positive thing for Bitcoin adoption having an entire country announcing its attention to make Bitcoin Legal Tender.

Why does the President want to do this?

El Salvador is a cash economy by large. Most citizens do not have a bank account. 70% of the population do not have bank accounts or credit cards. Their adoption will utilise their phones as a bank account, paying bills and send and receive crypto across the world. This will also help combat fiat inflation, if it gains mass adoption. 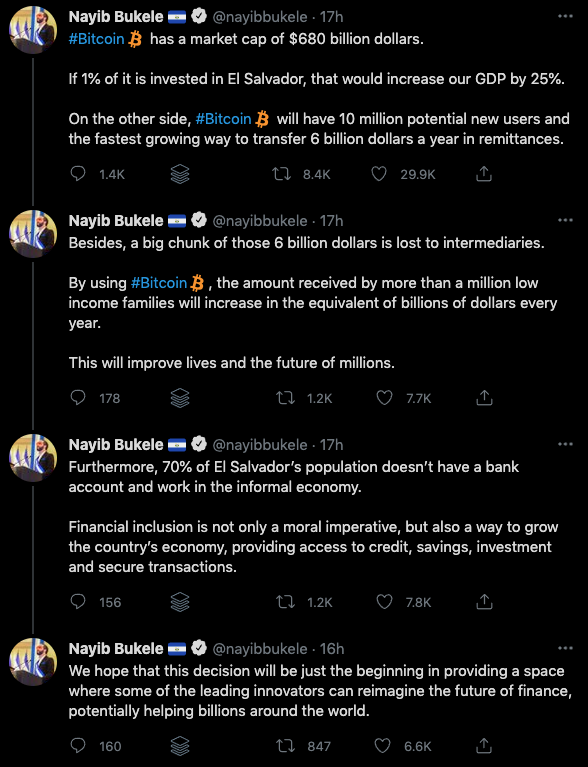 El Salvador has a contentious relationship with the IMF, who argues that El Salvador is too unstable for Bitcoin. When president Nayib Bukele announced his plan to adopt bitcoin as its second currency in addition to the dollar, it was no surprise when they launched an attack on this decision. The two sides were locked in political tug-of war duelling over President Bukele’s proposal and what would be best for their economy - only time will tell which side wins out!

The “remittances” are the money that migrant workers send back to their home countries. Remittance flows were resilient in 2020, with smaller declines than projected due to COVID-19 and economic crisis induced by a pandemic shutdown

Remittances from abroad are a huge part of GDP for many developing countries. In El Salvador, remittance ranked seventh amongst all nations and made up 21% of the total country’s GDP according to World Bank estimates. By adopting Bitcoin as an international currency that is solely digital in nature, people can more easily send money back home without worry about bureaucracy or sanctions getting mixed into the process which would dramatically increase efficiency while also cutting costs significantly across borders both near and far-reaching alike.

El Salvador needs to fully adopt Bitcoin as currency because they want it to be used within the country as legal tender for any transaction. If El Salvadore had adopted another plan, removing capital gains tax on bitcoin, they feared that it would lead people in El Salvador into a less holistic way of spending and perhaps facilitate crime or corruption.

The country of El Salvador sits atop the Ring of Fire, an encircling horseshoe-shaped grouping that stores 40% of all earth’s potential geothermal energy. The government wants to take advantage and develop it as a renewable resource for their people with high volcanic sites like Izalco Volcano–which is still active today!

Bukele is looking to revitalize El Salvador’s economy and give the country a fresh start by providing geothermic power for cheap. With this new source of energy, foreign investors will flock to help build up infrastructure in their homeland while at the same time creating jobs for locals that have been struggling with high levels of unemployment. It has never made more sense than it does now!

The IMF and World Bank (WB) have expressed concerns about El Salvador’s plans. Currently, El Salvador is in discussions with the IMF seeking $1 billion for general financing plans. The WB has included Bitcoin plan as part of its considerations in discussion regarding new round of funds being sought by country’s government to cover a number of financial needs including infrastructure development projects such as building schools, highways or hospitals that would help increase GDP per capita over time according to experts at the WB organization

Bitcoin has been a blessing for countries with unstable currencies. The adoption of Bitcoin will take some of the volatility out, and in a liquidity crisis there is no printing which would lead to hyperinflation.

The government’s plan for El Salvador is to create an oil economy in the form of Bitcoin. The people can pay taxes, buy goods and services with a cryptocurrency that they mine themselves by running their own geothermal operation on their property.

The government has proposed something new for El Salvador: swap petro-dollars with Bitcoins! This means regular citizens become actively involved in creating wealth (mining) rather than being passive recipients like most countries today where governments control all industries/resources or rely heavily upon imports from other nations.

Whatever you think, the future is not going to be easy. Finally, there may be rising interest rates as Bitcoin currently doesn’t have an associated bond market and it presently lacks a next usage level that can serve as both savings for debt conduit. 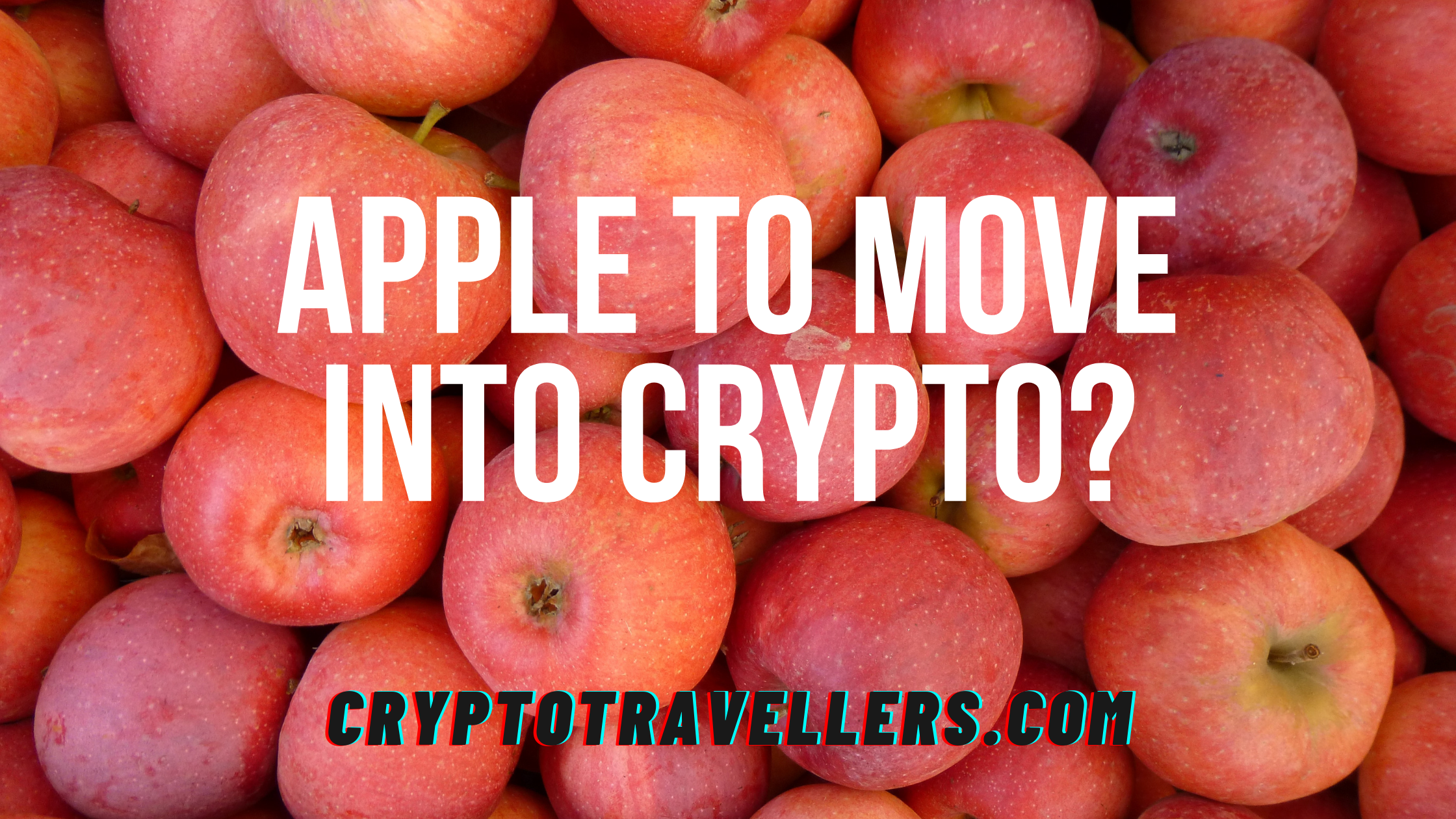 Apple to Move in to Crypto? 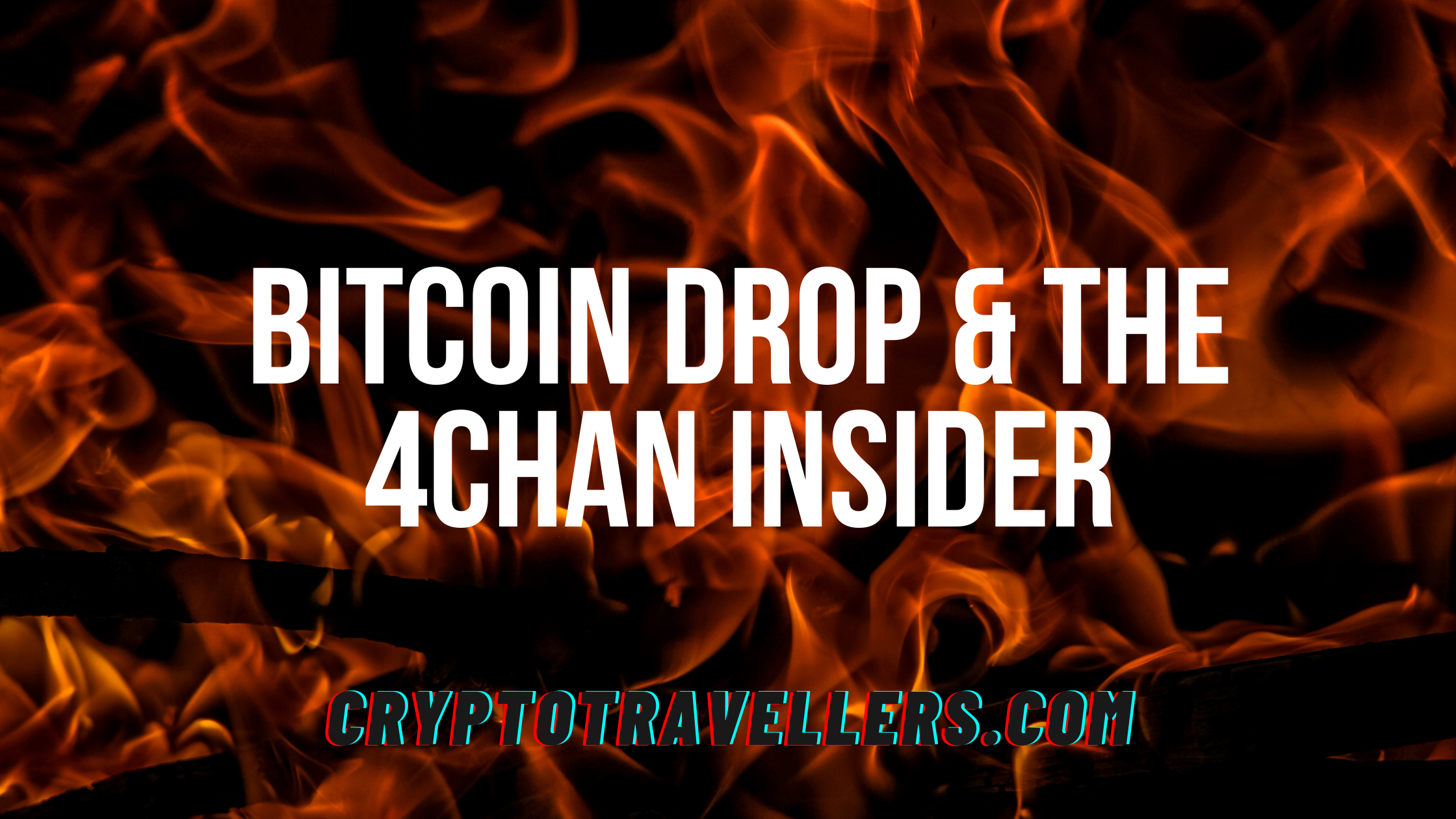 Bitcoin drop predicted by an insider on 4Chan?

Bitcoin Drop Predicted by an Insider On 4Chan? A widely shared message on the 4Chan message board has got the crypto community talking recently, the …